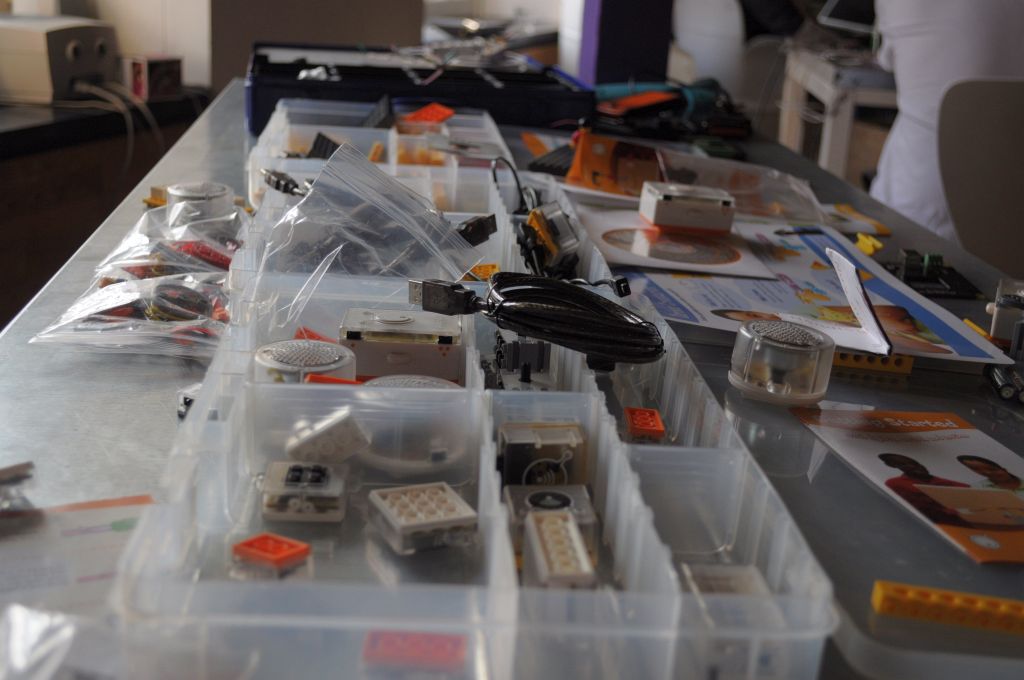 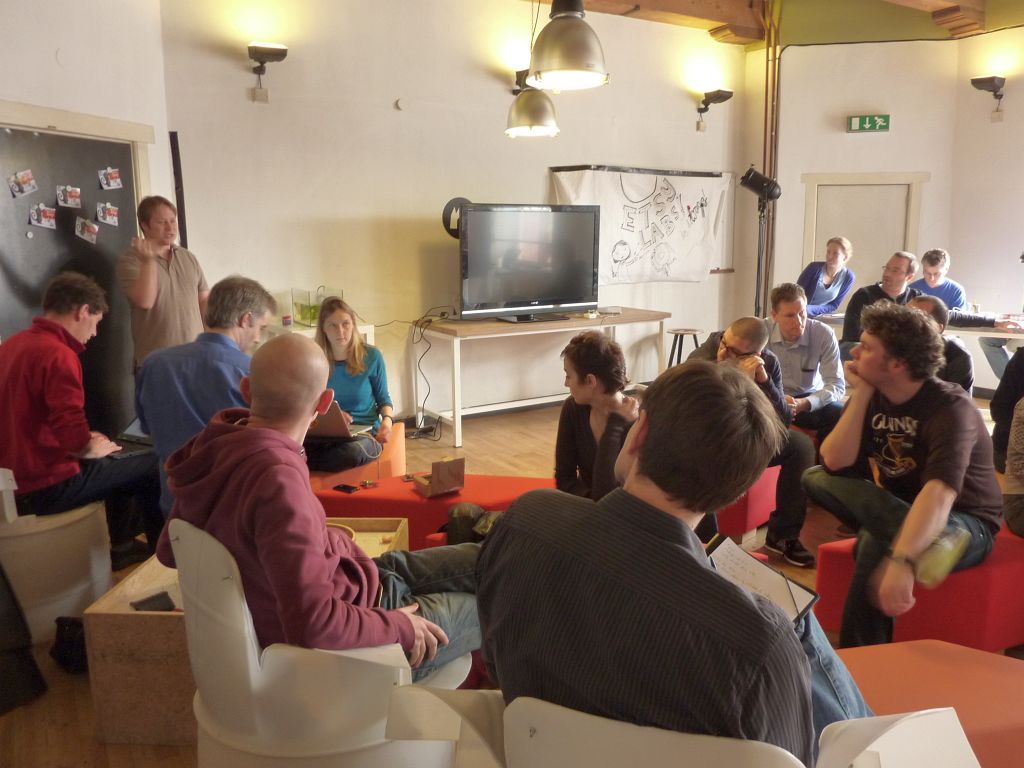 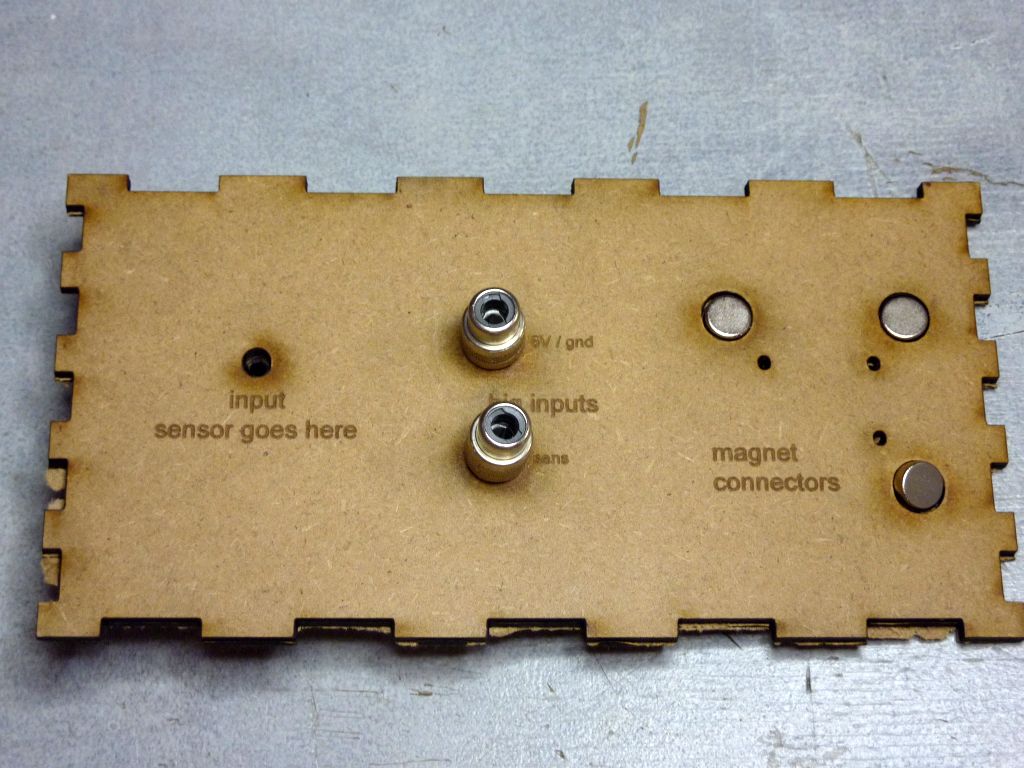 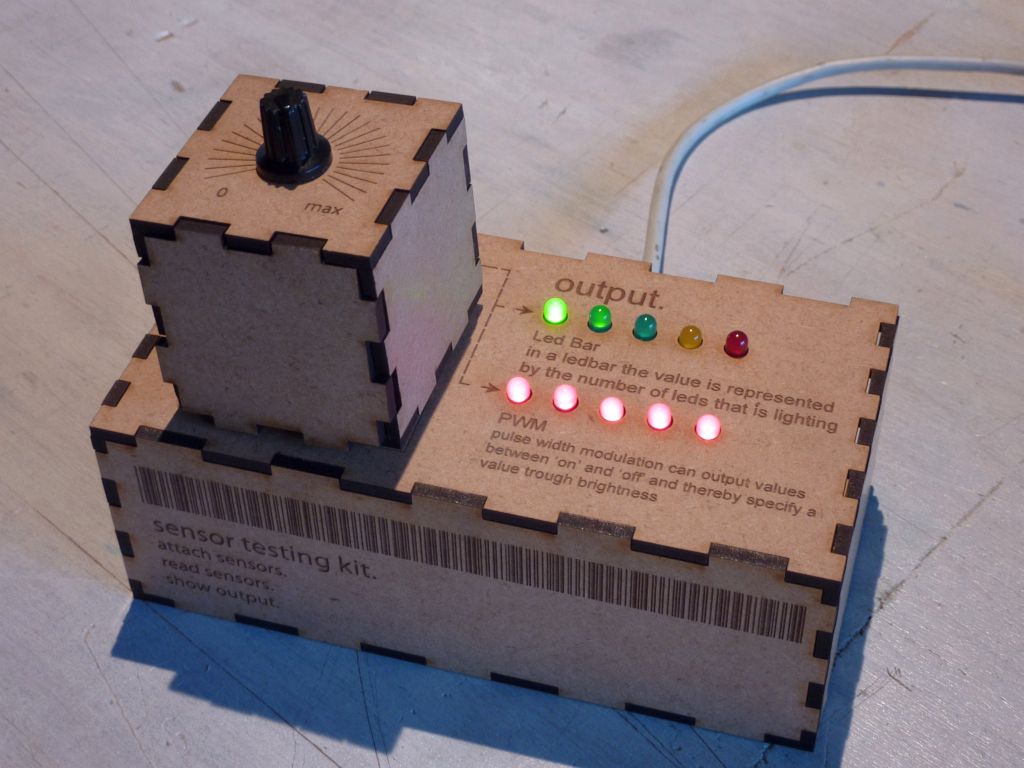 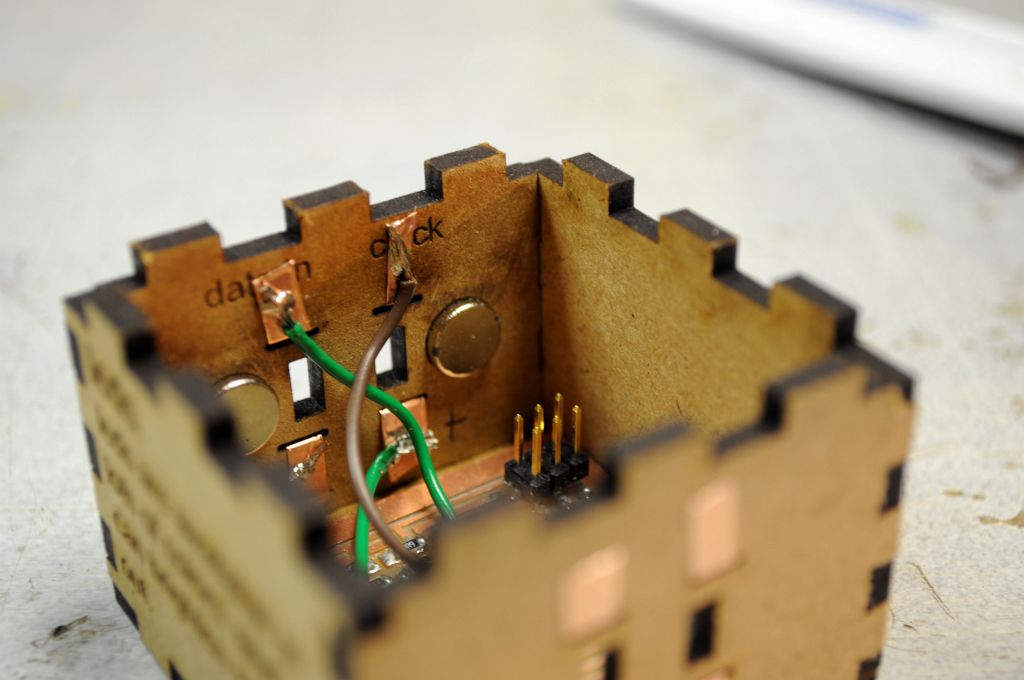 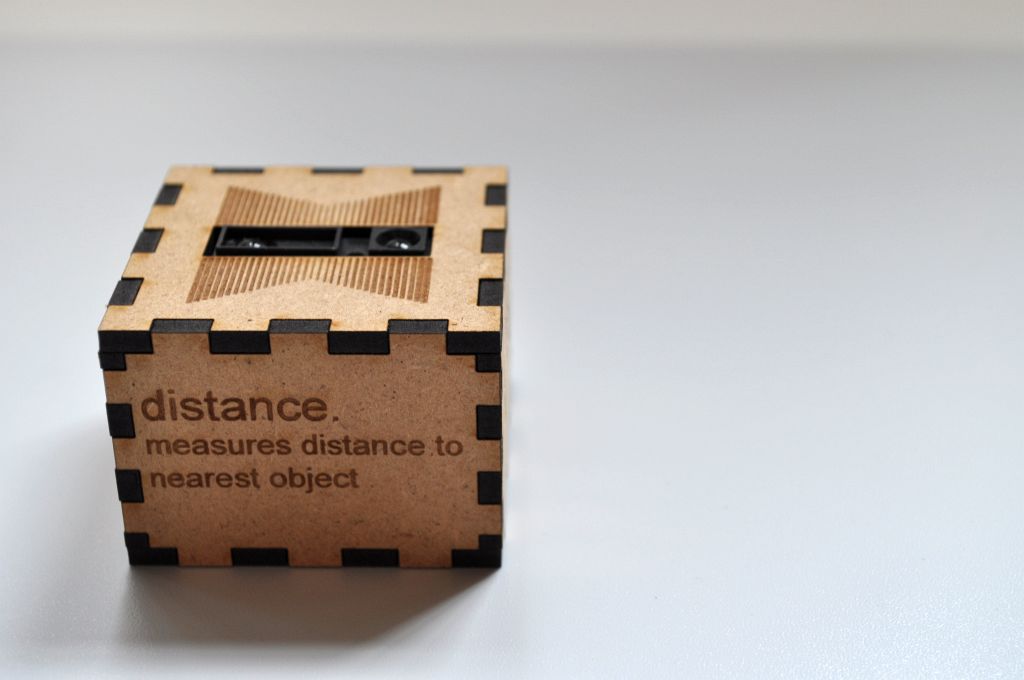 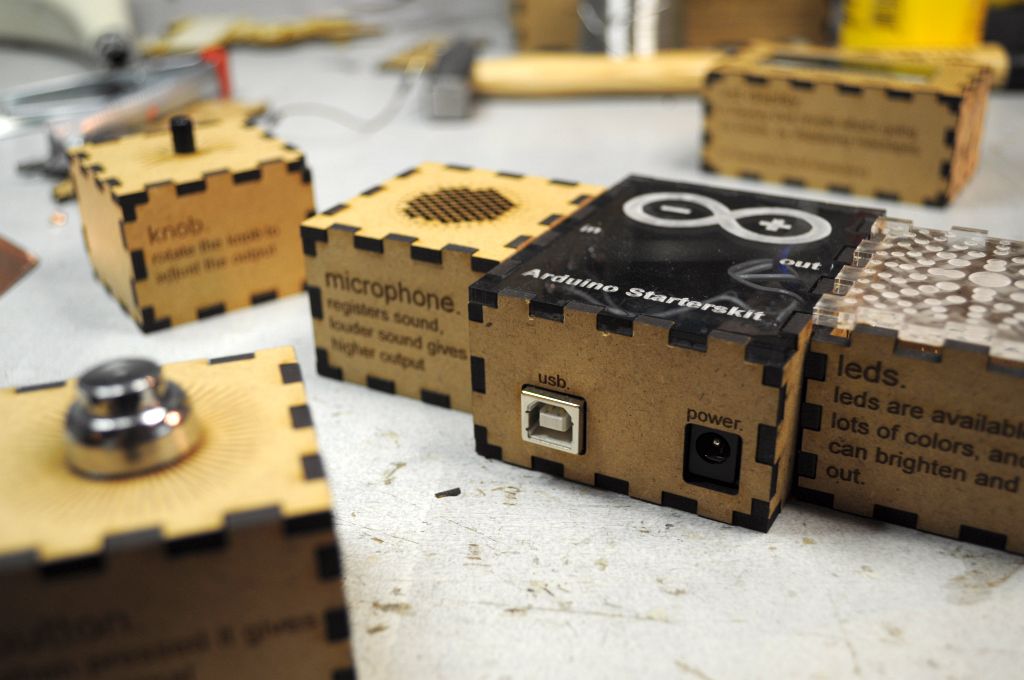 This semester I worked as an intern at the FabLab in Amsterdam, part of the Waag Society. Here I learned how FabLabs facilitate design students and other people in getting their ideas from paper into the physical world. By having people use machines they normally cannot afford, and by sharing digital blueprints, FabLabs create a completely new movement called "Open Design".

During my internship, I have worked on a design for an open arduino starters’ kit. This product is able to teach people basics of physical computing, meaning people with no earlier experience can create an interactive prototype easily. The product also functions as a stepping-stone for people who would like to dive into programming and physical computing. People visiting a FabLab can use the starters’ kit, and eventually a global adoption of the product by the FabLab community would be interesting. In order to achieve this, I made the design and documentation available online.

"The major growth has been in improving skills for digital fabrication, specifically using the possibilities offered by Fablab. The internship has also provided an opportunity to apply known skills, especially in relation to Arduino programming.
A somewhat better insight into the targeted user group, and a more explicit motivation of how and why the proposed tool could (eventually) be relevant for such users, could have been expected, and would have lifted the level of the internship."

.."There are two obvious open ends to the work however. First, the question  of how to provide insight into the functionality of the Arduino processor, and on how to allow programming it, has not been addressed in any depth. Second, no evidence can currently be provided that a (FabLab) community  can indeed be initiated around the proposed tool (a group of interested and capable users that recognize the potential value has not been identified explicitly)..."

The purpose of my internship was to design and fabricate a starters' kit and I have met this goal as such. The feedback points at some critical questions that remain after finishing my internship. While my internship coach is content with the design as it is now, my coach misses aspects that would have taken this concept to a next level.

In order to meet with this expectations, I will keep an eye on the use of my design withtin the Fablab, because I am curious about the future use as well. Eventually I would like to take the responsibility to evaluate the use of my design with the Fablab, and carry out the necessary improvements which could lead to the higher level mentioned above.

"The work that Pepijn has delivered is well-done and neatly documented, the toll however need to be developed further at the conceptual level (characterizing the intended user group and analysing the value proposition)."

I am content with the feedback stating that I have delivered a neatly documented report. This semester I have focused on my report, so I am glad my coach noticed development. More practice is necessary however, to integrate these documentation skills with the design process, in order to “tie the loose ends”.

Since I started, I was immediately hooked to the concept of sharing design digitally, to let people build upon each other’s designs. That is why the project I worked on in the FabLab, the arduino starter’s kit, is completely "open source" as well. In the end, I wanted to deliver a product, which was functional but also improvable. Therefore, I had put all the blueprints and the process of creating the product online. I did not completely finish as planned, since I would have liked to design more modules. This increases the amount of possibilities for the user. Actually, this is not up to me, because the future of this set depends on people who can recreate what I have done, and feel the need to improve. Therefore, I have spent extra time on documenting the details of the process, to make sure people in other FabLabs can reproduce and improve my design.

My internship coordinator advised me to learn Rhinoceros software and to practice to use all the machines. Therefore, I had to learn rhinoceros for 3D design and learn how to use machines to create complex shapes. Until now, I could only create objects by hand from a blueprint in my head or a sketch in my dummy, but a FabLab works opposite; design in the computer, and let the machines do the work. Get acquainted with digital fabrication opened up a world of possibilities for me.

More importantly, I learnt that each machine has its limitations. For example, the milling machine could only move the head up and down. So in case you need to create more sophisticated shapes (curvy surfaces) you still need to find another solution. At that point, I used my experience to come up with a solution in which the designed shape can be created with the tools available. Digital fabrication might look easy, but I experienced how often the results are different from the expectations. During my final bachelor project, I will be able to use the right tool for the job. If I plan to do a form study, I would still use model foam. For a high fidelity prototype however, I would visit the FabLab.

The idea behind the concept (a modular approach to physical computing) is nothing new and at the university lots of research has been going on about this subject.

It was not the idea that attracted me to this internship, but the possibility to test my skills in practice. At the FabLab, I noticed there was a need for a physical computing kit that matched with the philosophy of the FabLab.

It was not the idea that decided how the final product looks; the circumstances and requirements typical of the FabLab, shaped the idea into a concept that fits into this specific context and is able to appeal to the FabLab visitors.

It was not the idea that spoke to people’s mind when first presenting my work at The Waag, but it was the physical representation of the concept that made people see the possibilities of physical computing.

So what I have learned about design in practice, is that it does not take a brilliant idea to innovate, but in practice innovating is being able to communicate the essence of an idea to other people, trough design.

Within a company, people make decisions based on available time and money. I noticed this when the Waag was preparing an exhibition in Berlin. Because of my technical skills and experience at the Fablab, I was invited to come to Berlin, but a few weeks later, financial problems arose and the whole event seemed cancelled.

I was a bit surprised, because I was looking forward to the exhibition. A week later, I was told that the event would continue, but in a reduced format. By that time I was confused and amazed that such important decisions (to participate or not) could be made so close to the actual event, only based on financial aspects.

In the end, we went to Berlin with a group of 4 people: 2 designers and 2 interns from Fablab; I was one of the interns. The concept that was presented, personal downloadable design, received lots of attention during and after the exhibition. If the event had been cancelled, the two designers would have never had as much as publicity as they have now.

This showed me the importance of good communication within a company. The information I received about the event was so contradictory, that I did not know whether I would participate in the end. For me this was a real-life experience of how communication in a company could affect design.